De-victimise and give them paper

We are all humans

No borders, no nations!

Some of the words, letters and drawings that came out
from the re-mapping workshops that took place in Lesvos, during the years 2018
– 2019. The workshops were addressing multiple people: students, researchers,
academics, educators, aid workers, volunteers, migrants, refugees, and locals
to map their common understandings and imaginaries of the refugee crisis. 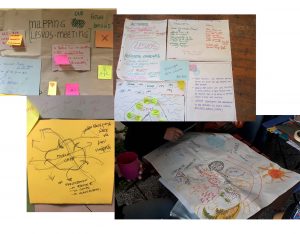 Re-mapping workshops held in Mytilene during 2018-19, photos by Anna Carastathis and Naya Tselepi.

The workshops were engaging with the ‘refugee crisis’ in the context of the
macrolevel, which, at the same time, converses with the everyday experiences of
crisis at the microlevel. At the same time, the workshops were inspired by
conceptualisations of the imaginary (Castoriadis, 1999) and the ‘collective
imaginary’ (Stavrides, 2010), the principles of ‘sociological imagination’
(Mills, 1985) and the horizons that are opened by the ‘constituent imagination’
(Shukaitis and Graeber, 2007) and the corresponding ‘radical imagination’
(Haiven και Khasnabish, 2010). (…)

The series of workshops juxtaposes, compares, and analyses the interactions between the macropolitical level and the micropolitics of everyday life. Specifically, in the context of individual actions, we will draw on the vocabulary of Deleuze and Guattari regarding the impalpable and the imperceptible (Deleuze and Guattari, 1994), in order to understand and include contemporary ‘imperceptible politics’ (Papadopoulos et al., 2008), which enrich perceptions and
representations of political relations and acts in contemporary environments of
governmentality. By these, we refer to social forces that depart from existing
measures and regimes of surveillance and control, reminiscent of affect and
collective processes, and which attempt to transform reality not only in
dialectical but also in tangible and material ways.  Moreover, such ‘minor cracks’ neither have as their aim ‘another world outside of capitalism,’ nor ‘to destroy capitalism through an organised attack’; rather, they aim to create relations and actions that do not reproduce capitalist power relations (Holloway, 2010) and to reshape politics more broadly in parallel and imperceptible ways (Isin, 2002a, 2002b).

As an outcome of these, the Lesvos Migration Atlas[1] created by our research team on the basis of the philosophy of assemblages,opens up a common virtual space for multiple experimental ideas, representations, practices and acts which havethe potential to disrupt the politics of representation, borders and control.

MΑP(PING)
spaces and places, people and populations, movements and migrations, borders and
hotspots, solidarity and resistance, everyday life and dreams…

GEOTRAUMA
as the suffering of the earth, nature, materials, bodies…

SYMBOLS
and the symbolic capital of representations

WALL WRITING
from walls as borders to walls as canvases

COMMODITY
in the era of really ‘really’ late capitalism

NARRATIVES
of the untold, the unsaid, the unspeakable

EVERYDAY LIFE
as the basic process of (re)production of life

this
is our ‘ATLAS’; a cosmos of ideas,
representations, practices, acts, contradictions…

all together in a process of becoming…[2] 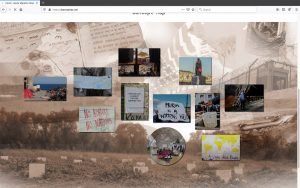 Our ‘Atlas’ is a process of capturing,writing and representing; multiple snapshots and processes in space and time; moving histories, narratives and imaginaries for the so-called ‘refugee crisis’; artworks on walls and in the streets; everyday life of local, migrant and refugee population within various spaces of Lesvos island; from the hotspot of Moria to the common spaces of living and struggling together; an assemblage of constantly moving and emerging practices and situations that always seem impossible until they are done… 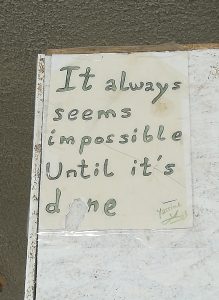 Photo from the hall of ‘One Happy Family’, Lesvos
by Naya Tselepi, November 2018 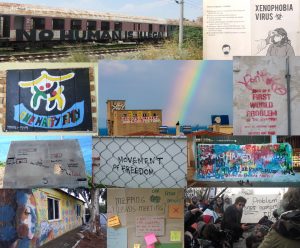 Collage of photos featured in lesvosatlas.net