Since Foucault’s lecture from 1978-79, titled The Birth of Biopolitics, there has been a tradition of reflections on the metaphysical, juridical, and political relations to life. Among them three notable orientations have emerged: Giorgio Agamben with his description of the “juridical grid” of politics (sovereignty) and life, Roberto Esposito and his depiction of the “political grid” of such biopolitics, and Davide Tarizzo’s “metaphysical grid” of life [1]. The refugee struggles in Lesvos which led to the Occupation of SYRIZA Offices can be read within the horizon of life as a site of the struggle between a) the apparatuses of the governance of life and, b) the Solidarians’ politics affirming life as a political site. But the struggle itself took life and the struggle for it through two stages 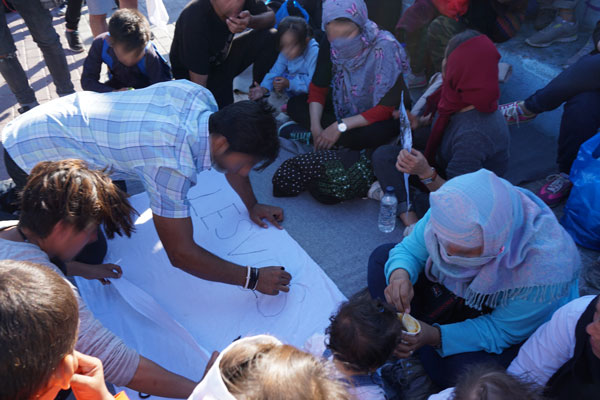 Stage One: Urbanization of Refugee Struggles

In par with the exclusion of political association for refugees in the 1951 Convention on the Status of Refugees, the apoliticality of the camp and its actors, as well as its geography, are fundamentally derived from the conception of refugee as excluded in the nexus of the nation-state and its subjects, “nativity and nationality”. It is with this exclusion from the polis that the camp, away from the social and political life of citizens and those legally entitled to participation, is located in a de-urbanized setting. The first stage of the Sapphous-35 was to bring this bare life, which is under the biopolitical regime of the camp, into the urban setting; that is: life itself is exposed in its nakedness, in the public square, as a site of struggle.

Upon the outrage of a large group of “citizens” motivated by the ambiguous rhetorical claims of the mayor, the next step entailed the politicization of the struggle of the refugees through the support of local Solidarians and the consequent occupation of SYRIZA offices. It was in the SYRIZA squat that life was, in turn, politicized, but now no longer as a site of biopolitics as the governance of life [1], but life as the site for political struggle, that is: an affirmative politics of life.

An Affirmative Politics of Life

In both these instances what stood out, albeit unspoken, was what can be termed “an affirmative politics of life”, which made life itself the site of struggle against the biopolitics of the state, its exceptions, the NGOs, and the camp [3]. As a result, two distinct approaches to politics can be distinguished in this border-space and the resistance to such a biopolitics [4].

[1] Agamben’s thought can be said to have exposed the biopolitics of the state as an impasse of subjectivity, the complete abandonment of the human to the governance of her life by the apparatuses of governance. Esposito, on the other hand, seeks to find to an “affirmative biopolitics”, which he attempts through reflections on the notion of the political – as the transformative operation on politics – from its threshold, from the “impolitical”, neither from the midst of the politics nor from the apolitical, but precisely from that point where life and politics meet, the person (Third Person: Politics of Life and Philosophy of the Impersonal Trans. Z. Hanafi (Cambridge: Polity Press, 2012)), on the one hand, and community (Communitas: The Origin and Destiny of Community Trans. T. C. Campbell (Stanford: Stanford University Press, 2009)), on the other. Davide Tarizzo (Life: A Modern Invention (Minneapolis: University of Minnesota Press, 2017) draws the metaphysical grid of the question of life, which extends from Immanuel Kant, through Schelling, and eventually Darwin. For Tarizzo life is the last name of modernity, and therefore, instead of abandoning this terrain, he recommends that we remain within this terrain of life as the topos for a possibility of undoing the machinery of biopolitics as exercised by the state and, in the case of refugees, the NGOs.

[4] The tradition designated Biopolitics finds its initiation in Foucault’s The Birth of Biopolitics. What is crucial about this seminar of Foucault is not that it directly addresses biopolitics, but rather, because it points out the contemporary configuration of “being” as the technocratic management of life, particularly the question of politics and the possibility of self-hood. It remains interesting to enquire into the Foucaultian pursuit of Parresia (truth-telling) as his attempt to escape the governance of life through social policy (Gesellschaftspolitik), by considering migrant struggles as struggles for a politics affirmative of life and in opposition to the biopolitical apparatuses.

Photo 2 Retrieved from Internet (no author)