It’s an idea both distant and a very profound one: Sappho, the lyric poetess standing eternally in the middle of a public square in her homeland; gazing; exploring her descendants amid the chaos.

“Burn them”, people shout to the poetess’ feet and smoke envelops her marble look, as screams reach her ears. The wailing of mothers and children, the pleadings for help in words that seem extraneous but all too familiar. Sappho remembers.

Stories unfold around her through the centuries and Sappho has become a symbol of female love and shameless desire, paving the way for women’s right to creative expression.

Sappho loved luxury and beautiful visual stimuli coming from foreign places, and Lesvos’ position as an trading hub for the East strengthens such a claim.

Sappho was also in exile, seeking refuge in Sicily because of her political views. History  would later do her justice:statues were made in her honor, coins were forged with her name and face on them. When her statuesque figure relocated in Lesvos decades ago, Sapho would inevitably be once again at the very center of history.

Lesvos soon becomes a non- topos, a place where asylum seekers are on the island and yet they remain “invisible”. Only when they emerge from the camps to occupy her square – a place historically intertwined with awakening and the changing of direction- only then do they bring the distant pain back to the fore, near us.

The asylum seekers which were attacked by her descendants, would be arrested later that night. The police officers’ shadow falls on the base of the statue while Sappho motionless watches peoples’ frantic running. What if Sappho was called to testify about what happened? Would she demand to appear in front of the bench? And how would she be treated by the authorities?

The “space” was the only thing that did not move that night. The Topos that is reconstructed for the purposes of a court case that -one day- will take place. A 3D model shows what was then inanimate, which it has already partially been gone.

Sappho’s square will soon be redeveloped. The redevelopment feels like as another attempt to remove the evidence of a crime. When and if the trial takes place, the appointed judges won’t be able to walk on the same pavement, see the same trees or rubbish bins that the perpetrators moved that night. They might  not even recognize the bus stop in the square or the street lights surrounding it. 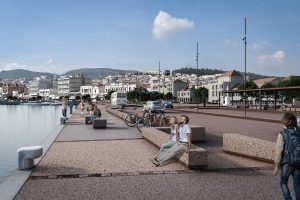 Yet the poetess will remember. If only she could point out to us those responsible for these acts. If only her gaze could once more extend beyond this island.

*On the night of April 22nd 2018, a group of asylum seekers was attacked by mob of locals in Sapfo’s square, in Mytilene, Lesvos island, Greece. Almost 3 years after, the court case is still pending, many of the accused perpetrators are at large, participating in other violent actions against people on the move and Greek citizens.

/Disinfaux is a not-for-profit research collective based in Greece. We conduct in-depth investigations on human and environmental rights issues, borders and surveillance, detention/exclusion regimes, migration/displacement, and alt-right/far-right movements. We operate as an autonomous network of on-the-ground researchers, academics, and journalists, interested in open-source investigations, field research, and investigative journalism.